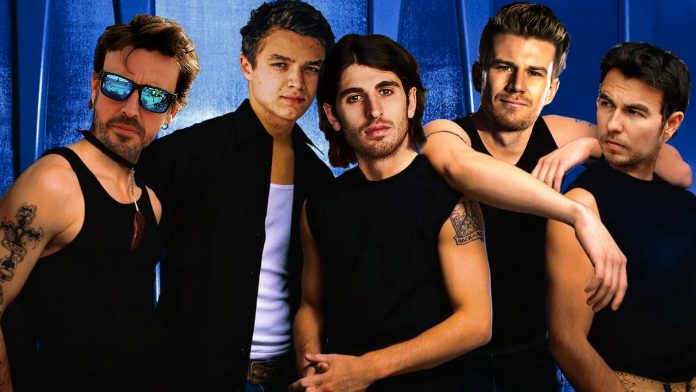 Nando, Lando, Antonio, Nico & Checo make up the group, who make their debut performance at this weekend’s Azerbaijan Grand Prix.

K-Mag and Daniel Avocado are also involved, collaborating on the brand’s new album.

Fans trackside at the Azerbaijan Grand Prix can catch the Bakustreet Boys performing their debut single ‘I Want It Parc Fermé’ on the main stage before FP1.

“It’s all part of our plan to be down with the kidz” Formula 1’s 65 year old chief Chase Carey told us.

“We’re getting some great reactions on Myspace!” Carey said, dabbing.

Other singles on Bakustreet’s debut album include “Bye Bye Bye, Box Box Box”, “Incomplete” about Williams’ 2019 car, and a touching ballad for Esteban Ocon – “Show Me The Meaning Of Being Lonely”

It’s not the first foray of Formula 1 into the world of boy bands – with Renault launching ‘Backmarker Boys’ earlier in 2019.

Liberty Media are confident the newly formed group will sound good when they take to the stage at a pre race spectacular in Azerbaijan.

“The autotune is Renault powered, so we’re pretty confident” a spokesperson told us.

Bakustreet Boys’ debut album “I’ll Never Break Your Heart (‘Cos I’ll Have To Replace It And That’s A 5 Place Grid Penalty)” is out now.

Gasly “Heartbroken” As He Trades In Jazz For DBS Superleggera